As far as I can tell, force blooming has nothing in common with force choking, but this is the first year I’ve tried it, so I’m still learning.

Anyhow, so far the experiment is a success. The picture below show one of my crocus bulbs pushing out a flower. 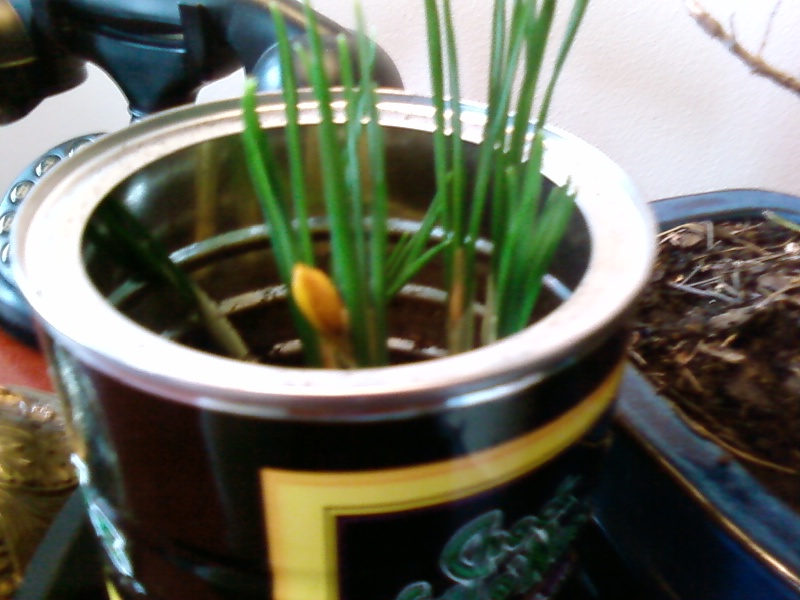 I’ve already got one 8×16 bed that I’ve been growing vegetables in for the last four years, and I want to expand. So I set up 2″x12″ boards around a new 8’x16′ section of my backyard that I intend to use for a new garden.

Right now, the space is a big mess. Imagine a yard that nobody mowed for 15 years and you’ll have a fairly good picture.

My soil is dense clay with lots of really nasty roots throughout. It drains poorly and is very compacted.

Here’s what I’m thinking about doing:

What kind of cover crop should I use? I need something cold-tolerant. I’m more concerned with improving soil structure and adding more humus to the soil rather than boosting nitrogen levels right now.

Side note: I know all about the idea of just turning this into a raised bed, filled with a truckload of fancy store-bought dirt. There’s something about that idea that just doesn’t appeal to me. I want to enrich what I have, not just import the finished product from somewhere else.

Sure, this idea doesn’t really withstand scrutiny; after all, the straw I’ll be mixing in and mulching with later is purchased.

But somehow buying an $8 bale of straw, and $40 worth of composted horse shit to mix in seems more in the spirit of sustainability than spending hundreds of dollars on a truck load of topsoil shipped in from who knows where.