I’ve been using the gunicorn WSGI server lately while I work on my next project. gunicorn is fantastic, except for one tiny nuisance. I have to restart gunicorn as I change my app code. At the beginning, this meant I would switch over to the terminal where gunicorn was running. Then I’d kill the parent process by hitting CTRL+C, and then start it up again, by typing:

Other frameworks often have a development mode that forks off a helper process that watches the source code folder. When some file changes, the helper tells the server to reload.

I’m not using any frameworks this time, so I don’t have that feature. I never really liked the fact that every time I saved a file, I would restart the server during development. Instead, in this case, I want to easily restart gunicorn, but only when I want to, and I don’t want to leave my editor.

It turned out to be pretty easy to do.

First I read in the excellent gunicorn docs how to tell gunicorn to reload my app:

How do I reload my application in Gunicorn?

You can gracefully reload by sending HUP signal to gunicorn:

Now any time I want gunicorn to reload, I can do this little command in a terminal window:

Those backticks around cat /tmp/gunicorn.pid tell the shell to do that part of the command first, and then feed the result into the rest of the command.

You can always use ! in vim to run some command-line program. If I had to explain the difference between vim and emacs, the one difference that is most interesting to me is that vim makes it super-easy to send buffer contents to other programs or read buffer contents from other programs, while the people behind emacs seem to think that any external dependency should ultimately be moved into emacs itself. I get the feeling that vim wants to be my text editor, but emacs wants to be my OS.

Anyhow, while I’m in vim, I run that command to restart like this:

After using that code for a while, and feeling confident it worked right, I mapped F12 in vim to do that action for me by adding this little thing to the end of my ~/.vimrc:

Now that means I hit F12 when I want to reload gunicorn.

Why use a friendly GUI when there’s cryptic shell commands out there?

Phoenix Coffee offers free wireless access without an access key and they broadcast their ESSID. Here’s how I connect:

That scan lists every available access point. The important piece of information to extract here is the ESSID. Now I set my wireless card up to connect to that ESSID:

And finally, I tell my card to request an IP address from the router:

I can type these three commands way faster than waiting for the GUI to fire up. Here they are again, without all the output:

$ sudo iwconfig eth1 essid any # any is a keyword, not the name of an ESSID.

Finally, some networks require an access key. Sometimes, people can give you the human-friendly version, and you can type that in like this:

$ sudo iwconfig eth1 key s:password # translates to the hex for me.

Note the s: in front. That translates what I type into the hex jibberish.

Other times, people insist on giving you the goofy string of hex digits, so you can set it like this:

I want to set up an email address that executes a script with every incoming email, so in my /etc/aliases, I did this:

Then I rebuilt the postfix alias db with sudo postalias /etc/aliases, and then sent an email to [email protected] That’s when the fun began. The script is run by nobody/nogroup, so it couldn’t log to my logging directory, because I require people to be in the adm unix group.

Then I created a user named runscript, and moved that | /usr/local/bin/email_reading_script.py line into a .forward file. I added adm to runscript’s unix groups.

AND STILL NO JOY.

I don’t know why, but when the script runs, the shell only seems to get the primary group. So, I kept getting permission-denied errors. I finally got stuff to work when I set adm to be the primary group for my runscript user. Now everything is OK.

This ate up the better part of the @#[email protected]#$ing day. Grr.

If this didn’t work, I was going to install procmail and go down that route.

I have a few Ubuntu servers scattered across the earth. This is all I had to do to make sure that their system clocks were synchronized:

Those Ubuntu packages are automatically configured to make your box use the time server at ntp.ubuntu.com. It couldn’t be any simpler.

By the way, if you want to point to a different time server, the config file in /etc/ntp.conf is full of helpful comments.

On one computer named snowball, I installed the ubuntu twill package, then tried to test my webapp:


The page clearly contains a form, but twill’s showforms command doesn’t display it. Fortunately, I found this post on the twill mailing list and so I didn’t waste too much time scratching my head. Then on this other box, coleridge, I installed twill using easy_install, and all was well:

Sidenote: snowball is my new computer. She is a beaut; a 600mhz Compaq Presario with 60mb of ram, and a hard drive that makes clicking sounds when anything happens. I think Clinton was still in office when she was manufactured. I’d like to thank my son for helping decorate her with some very cool Godzilla stickers. 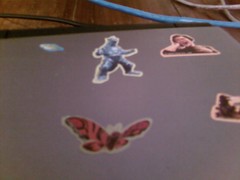 Installing on such an old machine meant I had to monkey a fair amount with some kernel modules, which is always a blast, and I am now much more aware of how much every program really costs in terms of CPU utilization and memory footprint.

Most every time I start a new screen session, I set up four windows using particular window names. After several hours of reading the screen man page and trying stuff out, I discovered how to automate the process. I added this section to my .screenrc:

You can use the -c option when you start screen to specify a file other than $HOME/.screenrc. So I might write a bunch of different .screenrc config files and then I can choose what ever one I want. I can already imagine a .screenrc customized for doing python work, and another one customized for writing rants, and another one for doing sysadmin work.

A few other useful screen options:

It shouldn’t be so hard to set up turbogears on ubuntu Feisty Fox. The easy_install-2.4 turbogears approach crashes when trying to install Cheetah.

So, here’s a list of everything I had to do: