This is the first year I planted any flowers. I bought a sack of gladiolus bulbs from the big box hardware store. They’ve been really fun to watch.

I never dug up a few of the onions from last year, and they survived the winter. Now they are making seeds at the top of each shoot. Onions and carrots take a few years to be able to reproduce.

I have a lot of respect for these onions now. They’re able to repel the hordes of rabbits in my backyard, they survived a freezing winter, and now they’re getting ready to spawn more. It’s a good thing humans and onions are allies.

Corn is doing well too, despite a late start and seed that is two years old. Last year, some critter in a single day ate all twenty stalks down to the ground. I think it was a deer that somehow found its way into my back yard. I’ve seen deer on Fairmount blvd in the morning, so it’s not impossible.

I spotted this cicada relaxing on one of my tomato stalks. He’s in the center of the picture, on the left side of the wooden stick. This photo doesn’t show his colorations well. His wings are iridescent like a dragonfly’s wings, and his shell is really shiny turquoise.

When Charlie was just learning to speak, he and I talked about what sounds we would hear. When we heard cicadas in the trees, he would say “train”. I guess they reminded him of trains. Now we call cicadas train bugs.

In between rows of corn, I planted pumpkins and beans. Rabbits destroyed all the beans, but they ignored the pumpkins, and the vines now all have big orange flowers. I found two bees inside one flower.

Finally, I’ve been letting our 14-year old cat out into the backyard a lot to sun herself. The rabbits stay away when she’s around.

So, yeah, gardening is pretty fun.

I planted asparagus crowns last spring. Asparagus crowns look like dried out root clumps. At the end of last summer, I started finding little shoots around where I planted the crowns. Those shoots grew plants about three feet tall with lots of fine leaves. Very pretty.

I didn’t harvest anything last year. It takes several years for a planted crown to be ready. Here’s way more detail than most people want, from the Michigan Asparagus Advisory Board:

Do not harvest your asparagus the year you plant it or the year following planting. The asparagus plant needs to grow and establish a healthy crown and it will need all of its energy to do that. The third-year after transplanting we generally harvest the field for about two weeks.

Then winter came and all the plants died. After a few weeks, the plants looked like straw. Then on Sunday I found this shoot: 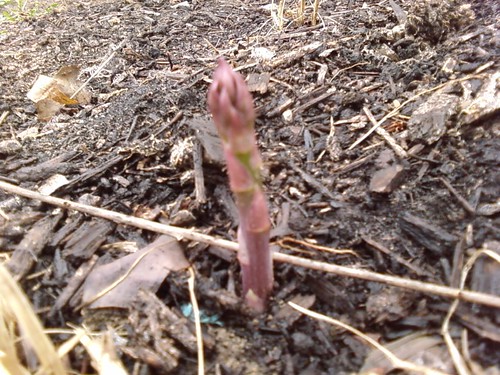 I found a few more shoots in other places. This is really exciting. Only one more year to go before my harvest!

On Saturday, December 15th, I pulled up the last row of carrots from the garden. I had set up my cold frame around them about a month ago, when the snow started falling. The cold frame is really just a big wood box with heavy-duty cellophane across the top. It works like a miniature greenhouse, and it keeps the snow off my plants. So, it let the carrots grow for another month when everything else had frozen.

Anyway, here’s a few pictures. This one shows the carrots before getting washed: 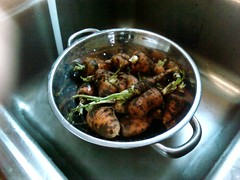 After scrubbing the dirt off, they look like food: 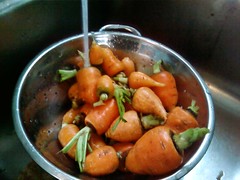 And in this picture I lined them up like little people. 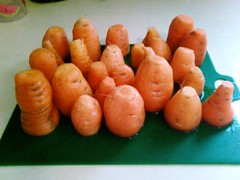 I set the oven to 400 degrees, sliced all the carrots into little discs, tossed them in lots of olive oil, salt, pepper, and thyme, then spread them out over a cookie sheet. Once the oven was ready, I put the cookie sheet in and set the timer for an hour. Then I went outside to shovel my driveway.

By the time I finished shoveling snow, the carrots were ready. I ate all of them while standing over the sink. They were so delicious I couldn’t stop eating in order to take any pictures.

I have more gardening pictures on flickr, including a lot more carrot pics.

I have a variety of jalapeno plants in the backyard garden. Some are thriving. Some never did very well. One plant in particular grows beautiful, gigantic, bug-resistant peppers.

I want to harvest the seeds from this plant in the hopes of propagating it next year. Here’s my science question — do all the seeds in all the peppers on this plant have the same DNA?

When I talked to her this spring, my grandmother told me to be sure to plant some potatoes. I’m glad I did. I bought a bag full of tiny starter potatoes in April, and a few weeks later, I planted them.

My 1962 Time Life Encyclopedia of Gardening recommends digging up half the crop early to enjoy “new” potatoes. I took these shots around the beginning of August when we harvested about half the plants. Here’s our haul: 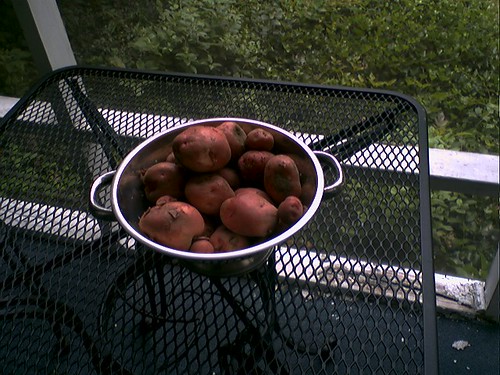 After digging them all up, and washing them thoroughly, we sliced them up and then roasted them with olive oil, rosemary, and lots of salt and pepper. Here’s a shot of the finished product: 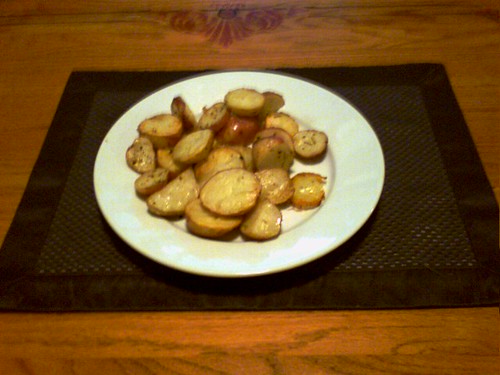 Finally, I took this picture while Charlie and I ate dinner on the back porch: 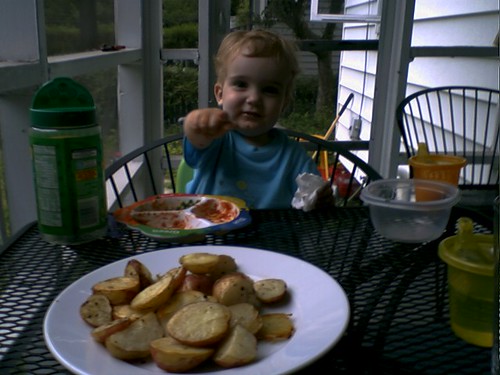 It is a cliche to claim that backyard vegetables somehow taste better, but these potatoes really seemed different. I could rub the red peel off with my fingers. I swear these remained moist even after roasting them. Within a few hours of digging up these plants, we were eating them. Anything at Giant Eagle is at least 3 or 4 days old, maybe more.

We dug up the rest of the potatoes at the beginning of October. I didn’t take any pictures and this time my wife mashed them up with lots of chives (from the garden) and sour cream (from the grocery store).

I’ll definitely plant red potatoes again next year. The yield was fantastic, and the rabbits and squirrels seemed to ignore them.

Next year, I’ll experiment with a no-dig method I read about where the potatoes get buried in mulch, and over the season, more mulch gets added repeatedly to encourage more growth. I dumped more mulch over my plants this year after I got a tip from a colleague, and that seemed to encourage more tubers to form.

In summary, potatoes are neat.